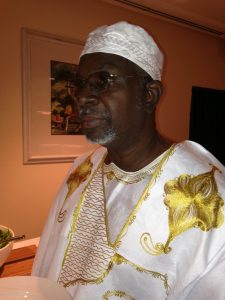 Bro. Aiyegoro Ome, formerly David George Murray attended Trinity College from 1959 to 1967. He graduated in 1970 from the University of the West Indies, St Augustine with a Bachelors degree in History and Sociology after doing his final exam at the Royal Gaol where he was imprisoned as a political detainee in that year.

Bro. Ome was at the forefront of the Trinidad and Tobago Revolution of 1970 which altered the nature of social, political, economic and ethnic relationships in the society.

He is now a Vice President of NJAC, head of the Cultural Committee, advisor to His Excellency, CARICOM Cultural Ambassador, Chief Servant Makandal Daaga and Chairperson of the Trinidad and Tobago National Reparations Committee.